The normal lunchtime Saturday calm in late October at Bastijana was interrupted this weekend, as Bastijana hosted some 300 delegates from Sabatina 2013 for a glass of wine, as part of their wine tour of the island. 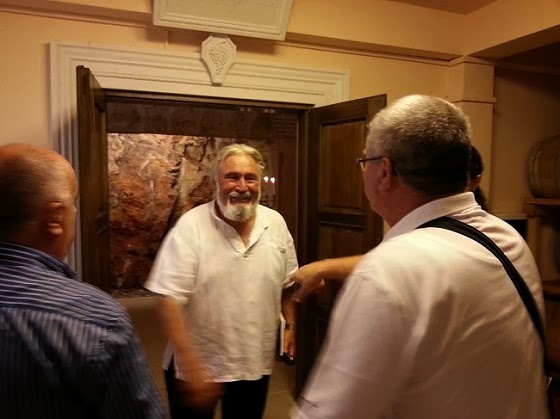 Andro was on hand to greet his guests, who enjoyed a tour of the winery, before tasting the Tomic range. 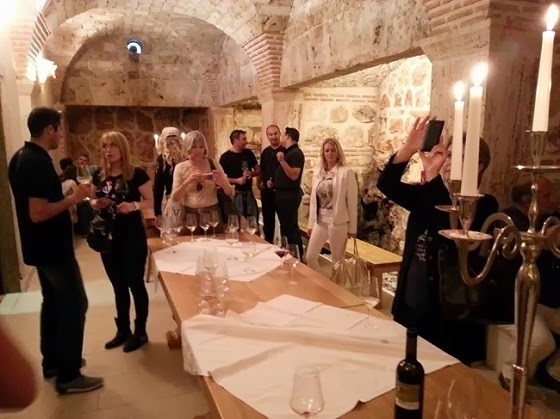 The Romanesque cellars seemed to popular with photographers... 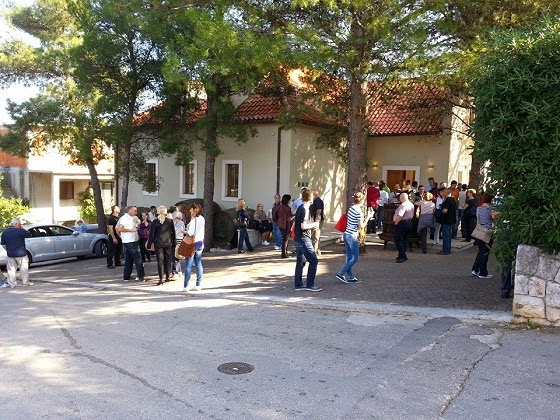 And with such gorgeous late-season weather, many of the visitors enjoyed the Jelsa October sunshine. 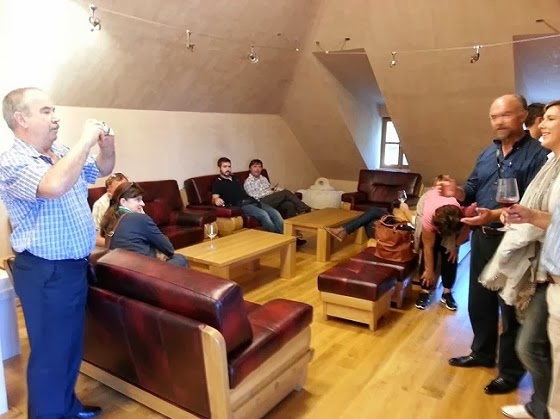 While 300 people is on the larger side for receptions at Bastijana, the winery has plenty of experience holding events apart from wine tastings, including wedding receptions and theatre productions. If you are interested in learning more about our corporate and entertainment services, contact us via our website www.bastijana.hr
Posted by Tourism in Dalmatia at 1:33 AM No comments:

Tomic Among the Awards at Sabatina 2013 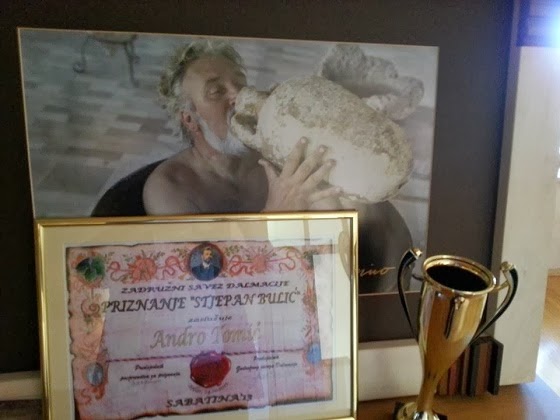 Hvar was the proud host of Sabatina 2013 last week, the 23rd gathering of the wine community at Hotel Amfora in Hvar Town. Among the winemakers recognised at the four-day event was Andro Tomic, who was awarded the Stjepan Bulic prize for his contribution to the improvement of wine.

Andro was obviously delighted with the award, which could be seen at the Bastijana winery in Jelsa this weekend. 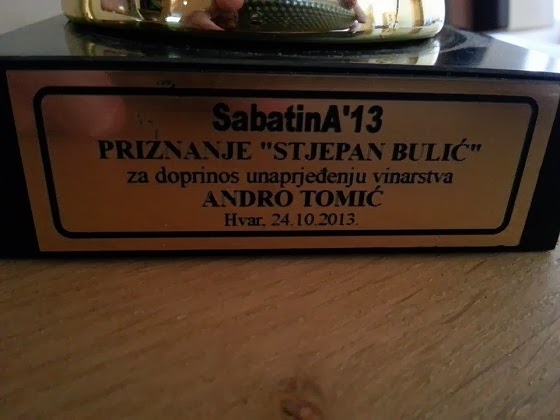 Posted by Tourism in Dalmatia at 1:07 AM No comments:

The View from a Jelsa Winery in Late October 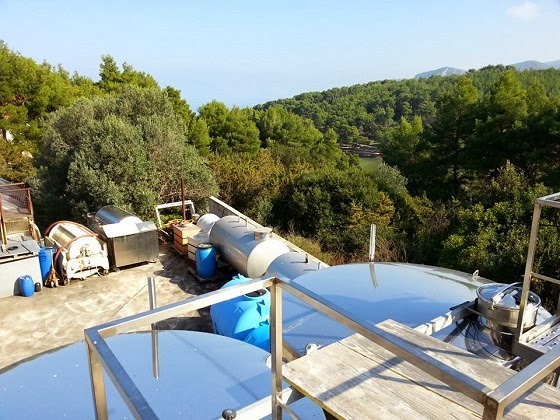 Happy grapes and happy workers make for quality wines, and so it is important to have a clean, healthy and picturesque working environment, a place where the wine production can take place, and the workers enjoy their place of employment.

There was nothing wrong with the terrace view at the Tomic winery in Jelsa this weekend, as some 300 delegates from Sabatina 2013 dropped in for a drink. Here the view from the terrace above the tanks of wine below. If there was one complaint about the view perhaps, it was that it was such a perfect day that it was hard to distinguish the blues of the sky and sea through the haze.

Why not come and enjoy the terrace view at a Tomic wine tasting. For more information, visit www.bastijana.hr 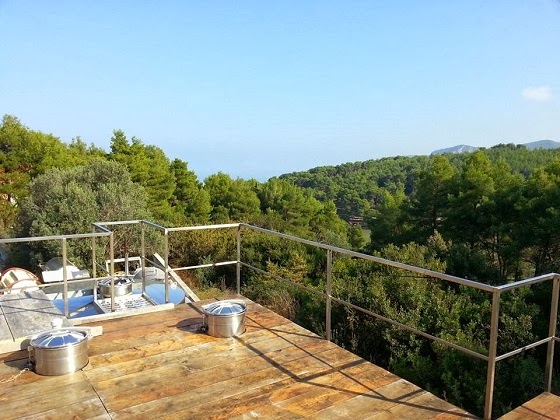 Posted by Tourism in Dalmatia at 12:45 AM No comments: 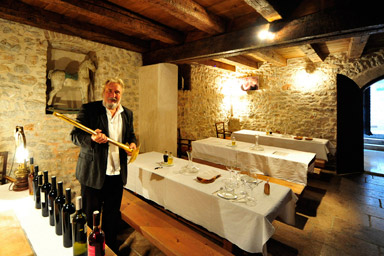 Join Bastijana for an excellent Croatian wine experience in the stunning cellars of historic Diocletian's Palace in Split.

The cellars of Diocletian's palace will be the stage for event that no wine-lover should miss. Organised by Slobodna Dalmacija, on Friday and Saturday, October 11-12, the best Croatian winemakers will gather on Vinski Podrum (Wine Cellar) fair.

The fair opens at 2 pm on Friday, and it will be open both days until 9 pm. During Wine Cellar fair, lectures about wines, grapes and authentic Dalmatian sorts will be held in Split cinematheque Zlatna vrata. Also, in the Palace's basement visitors will be able to attend several workshops, winetasting, connecting food and wine lectures, etc. The most interesting one will take place in Vestibul Palace hotel, with leading Croatian sommelier Franjo Franc. On Saturday there will be another workshop about Dalmatian pastries and dessert wines, and offer is not limited to Dalmatian wines, but will also include wines from other parts of Croatia.

Another fine event will be a workshop by Sanja Muzaferija, president of Women on Wine association with wines by Mare Mrgudić Bure from Pelješac peninsula, and to many potential wine-growers might be interesting to hear about loans available through Croatian Bank For Reconstruction and Development, etc.

Of course, the fair wouldn't be complete without sale of best Croatian wines, including brands with national and international awards. There will be wines from coastal and inland Dalmatia, islands, Istria, and continental Croatia. As a supplement, there will be chocolates with authentic spices, olives and olive oils, and all other products that can represent the Croatian culinary and wine story.

Posted by Tourism in Dalmatia at 1:54 AM No comments: 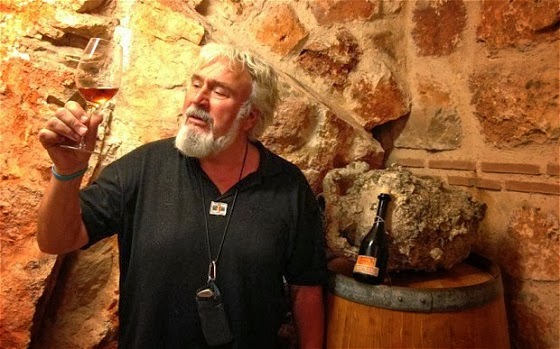 While the Bastijana winery is used to media visits, this year saw a considerable rise in international journalists heading to Jelsa to meet Andro Tomic. The Daily Telegraph, Independent, Associated Press, Radio Sweden, The Irish Times and BBC Television were among those coming to Jelsa.

The increased interest was due to the so-called Prošek scandal, where new EU guidelines proposed that the name be changed so as to avoid confusion with the Italian sparkling Prosecco. More than one journalist left with a bottle or two of Andro's dessert wine in their luggage.

As one of Croatia's leading Prošek producers, Andro takes particular pride in his Prošek, and it is arguably his best-known product.

Relative of the Italian Vin Santo and several other top quality Mediterranean sweet wines, Prošek originates in the coastal part of Dalmatia and Istria, which are also the only two regions where it is still made. Produced the traditional way, Prošek Hektorovich is the product of carefully picked more mature grapes with some dried grapes intermixed, grown on specially selected locations, which are then dried on straw for up to a month. The resulting wine is irresistibly sweet, with the ripe aromas of raisins, dried fruit and jam…
Prošek Hectorovich was named after Petar Hektorović, a great poet, hedonist and nobleman who came from the island of Hvar.

Served chilled to temperature of 10–12°C. This wine pairs wonderfully with desserts, especially dried figs and the traditional Dalmatian biscuits , as well as blue cheeses. Small children also tend to like it very much, so it is best to keep it out of their reach.
Posted by Tourism in Dalmatia at 5:56 AM No comments: 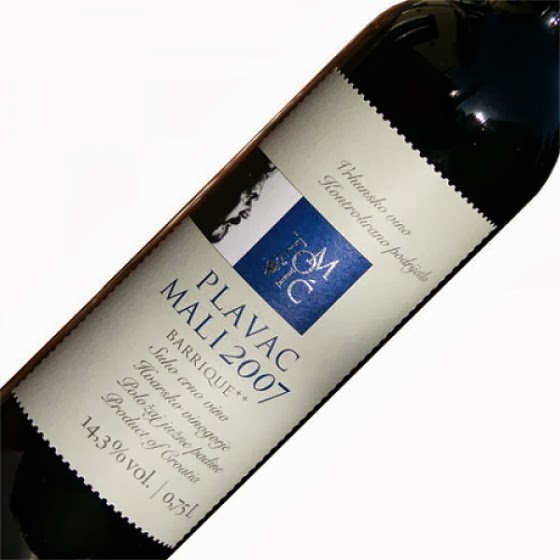 Plavac mali is the king of Croatia's red grape varieties. Related to the internationally better known Zinfandel, it produces strong, concentrated wines, and one of the best locations for its grapes is the island of Hvar. Bastijana produces two 100% Plavac Mali reds (as well as a rose), the base Plavac and the oak-aged barrique Plavac Mali, which is aged in a combination of different oak.

"Plavac mali is above all the product of its terroir or the sum of natural influences in the vineyard. The extreme conditions of the steep and sunny slopes on the south side of the island of Hvar impose the organic approach as the only choice – in other words, manual labor, with minimal intervention in natural processes and resulting in small yields of the highest quality grapes. The natural intensity of the varietal aroma of the dark and ripe fruit is rounded up by aging the wine for 8 to 12 months in a combination of French, Slavonian and American barriques. The final special quality of our Plavac mali lies in its "French" type of elegance, as this wine has a tendency towards preserving both the classic of the aromas of Plavac Mali, as well as the style of the Old

Its character will be best appreciated if served at 18-20°C. This wine makes a first-rate match with spicier dishes, roasted meat and especially with Dalmatian culinary specialties such as brudet, pašticada etc."

Posted by Tourism in Dalmatia at 1:16 PM No comments: