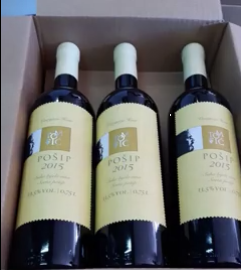 Allow us to present our new product - premium quality dry white wine Pošip, vintage 2015.
The wine is made from a selection of grapes from Ager (location between Jelsa and Stari Grad) and the southern position of the island Hvar (vineyards around Milna and Hvar). 30% of young wine is aged for 6 months on fine lees in oak barrels, which gives the complexity of flavors. This exclusive wine (about 6,500 bottles) is best served at a temperature of 8-10 °C and perfectly accompanies octopus under baking bell the or grilled squids.

Here is it in the bottling process:

Posted by Tourism in Dalmatia at 8:58 AM No comments:

How Far Does Tomic Wine Travel? A 90-Point Plavac Tasting in Indonesia! Tomic wine tastings take place in various places. The most common of course are in the comfort of our Bastijana winery in Jelsa, and we are open daily during the season (and otherwise by appointment) to introduce our range of wines.

But sometimes, tastings take place without our knowledge, in faraway places, but surely not many have taken place as far away as... Bali in Indonesia!

Check out this video below from the team at Exotic Wine Travel, the moment when they are first introduced to Plavac, with a bottle of Tomic Plavac 2013. And with a rating of 90 points from the tasting, this will probably not be the last time Exotic Wine Travel will be checking out the pride of Dalmatia.

To learn more about our wine tours, visit the Bastijana website.

Posted by Tourism in Dalmatia at 8:45 AM No comments: 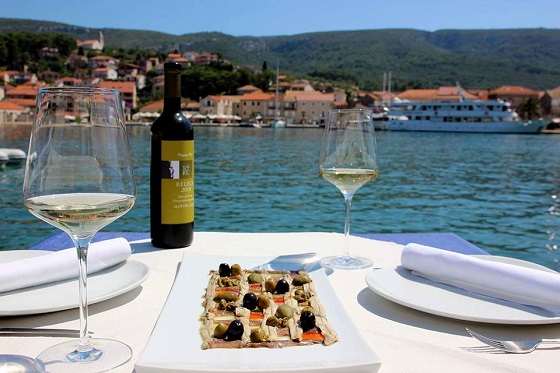 Did you know that Hvar's diet has been officially recognised by UNESCO?

With such a healthy diet, based on quality olive oil and wine, it is perhaps hardly a surprise that Hvar, as well as six other locations on the Mediterranean, had its diet inscribed as UNESCO intangible heritage back in 2013, the fifth UNESCO heritage for this amazing island.

The Hvar Wine Association has decided to celebrate this event together with its partners, and a Festival of the Mediterranean Diet is currently taking place on the island, celebrating the Hvar story of wine and sardines. Tonight the action moves to Jelsa, with a wine tasting at St. John's Square, but not before you have the chance to enjoy a glass or two of Tomic Beleca, accompanied with some specially priced dishes for the festival at participating restaurants Me and mrs Jones, Taula and Spizza.
Posted by Tourism in Dalmatia at 6:28 AM No comments: